On Wednesday as I was going to bed I noticed it was quite hot in my house. I checked my central air blower unit and there was frost on the coils and the blower wasn’t moving. It kept trying to start but not being able to start. The 7 segment led was showing “b5” which I was able to find in the manual:

So the next day I removed the blower assembly and tried to extract the motor. The motor shaft extended quite far past the end of the fan and it was rusty so it didn’t want to come off. I attempted to get it off using gravity and a hammer: 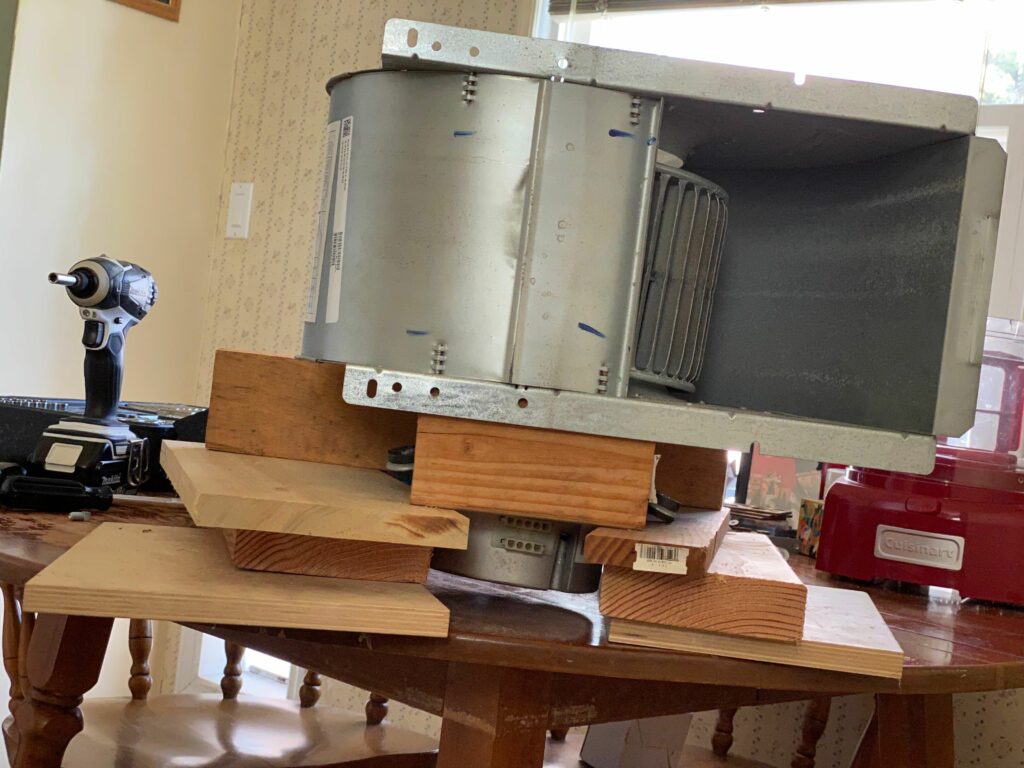 I failed. I was only able to get it this far: 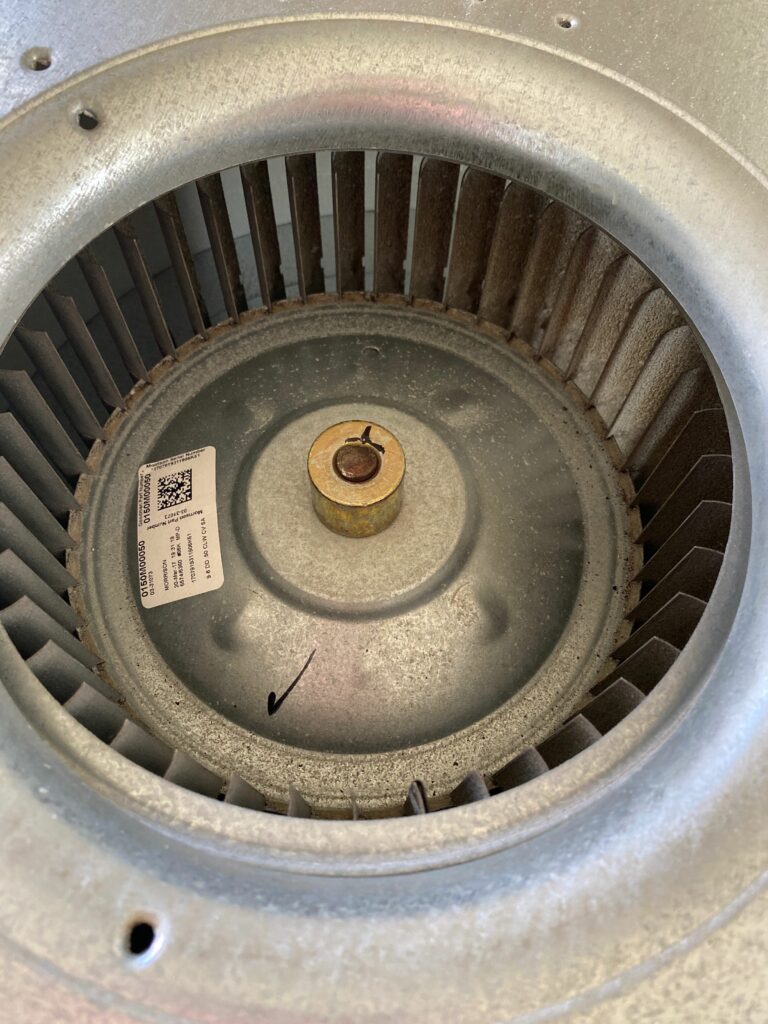 So I took it to my dad’s house because he has a better tools than I do. We ended up drilling the end of the shaft out to get the motor removed. We tested on the bench and read a lot of troubleshooting manuals and determined that the motor was shorted. It was hard to turn and there were very obvious magnetic “detents” we could feel when turning it by hard. We took the motor apart and looked around: 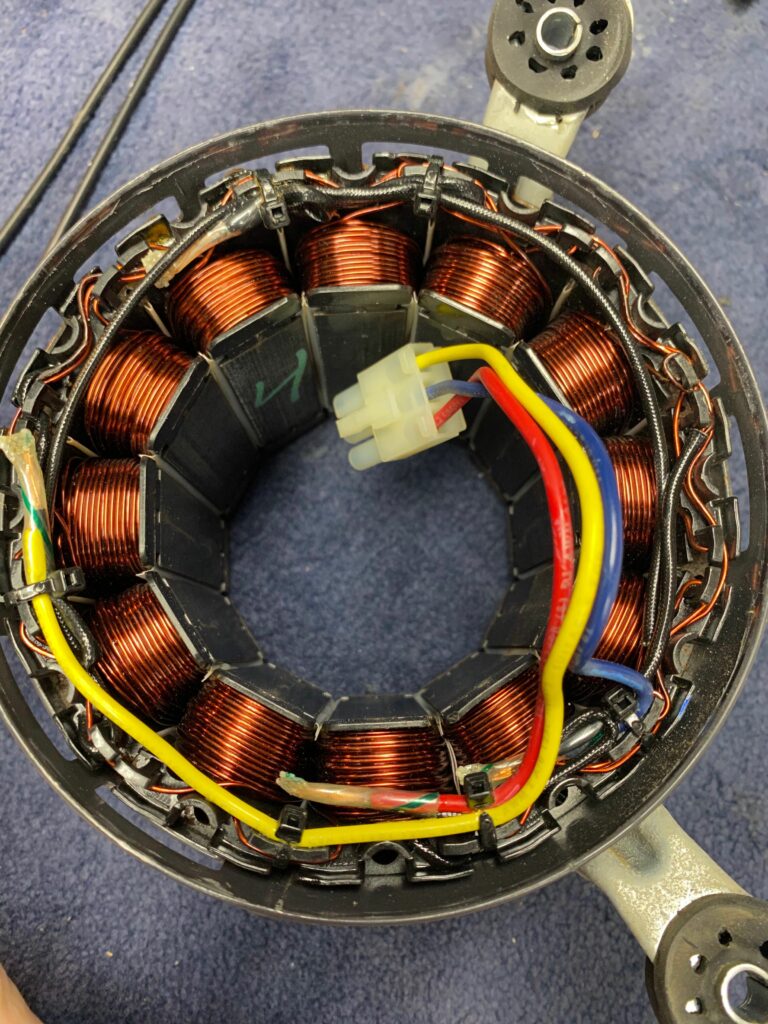 We measured the resistance across all the pairs of pins on the 3 pin motor connector: 2 pairs measured 3 ohms and one pair was at 0.9 ohms. We kept the meter plugged into the shorted pair and moved a bunch of wires around. At some point we noticed it had changed up to 3 ohms but we weren’t sure which part we had messed with to make it that way. All attempts to short it out again to identify the bad wire area failed. From this point on it was never shorted.

We put it all back together, fixed the drilled out shaft by cutting it off with a hacksaw and then sanding off all the sharp edges and rust. I took it home installed it and it spun up. It ran for about two minutes and then died. Same symptoms. I kind of expected it since we really didn’t fix anything, just shuffled things around, but it was still disappointing.

The next day I ordered a used motor off ebay and suffered through a hot July Friday.

Saturday I decided to have one last ditch effort to fix it since the weekend was supposed to be upwards of 90ºF. I got it apart and found this: 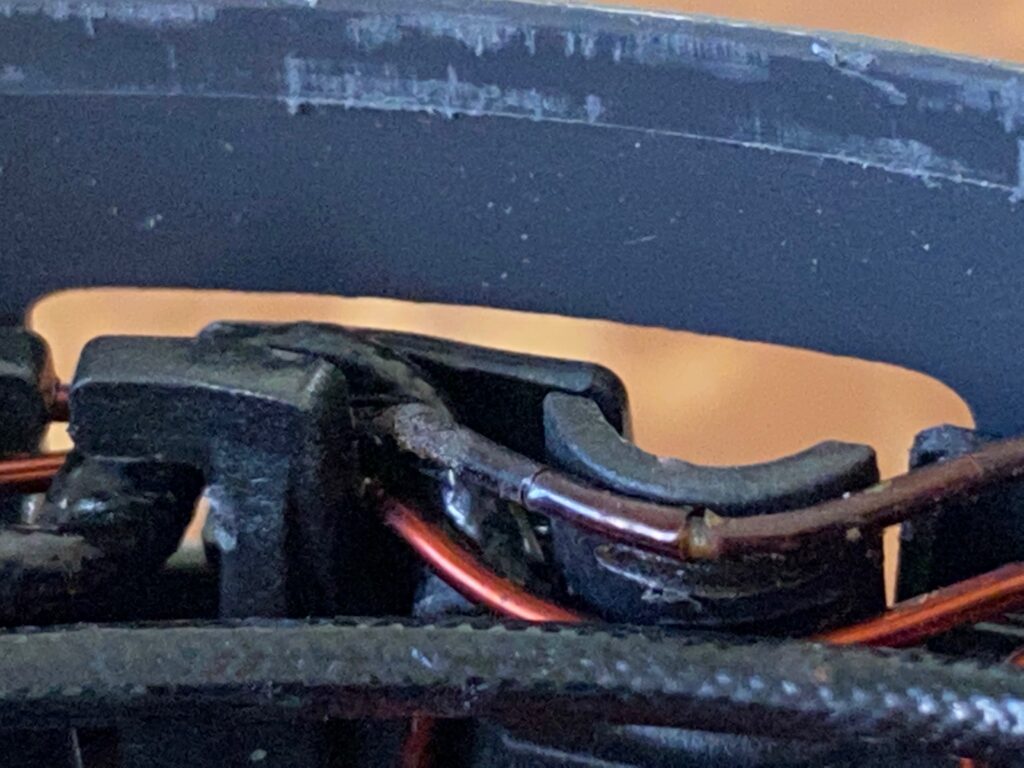 That looks obviously bad and you’d wonder how we could miss it, but that’s only because it’s blown up so big. That wire is one of the skinny winding wires around the motor. In fact I couldn’t actually see the issue at all until I used my phone camera as a magnifying glass. I pulled out some slack on the wire around that break to see if there were any more issues. it looked like this: 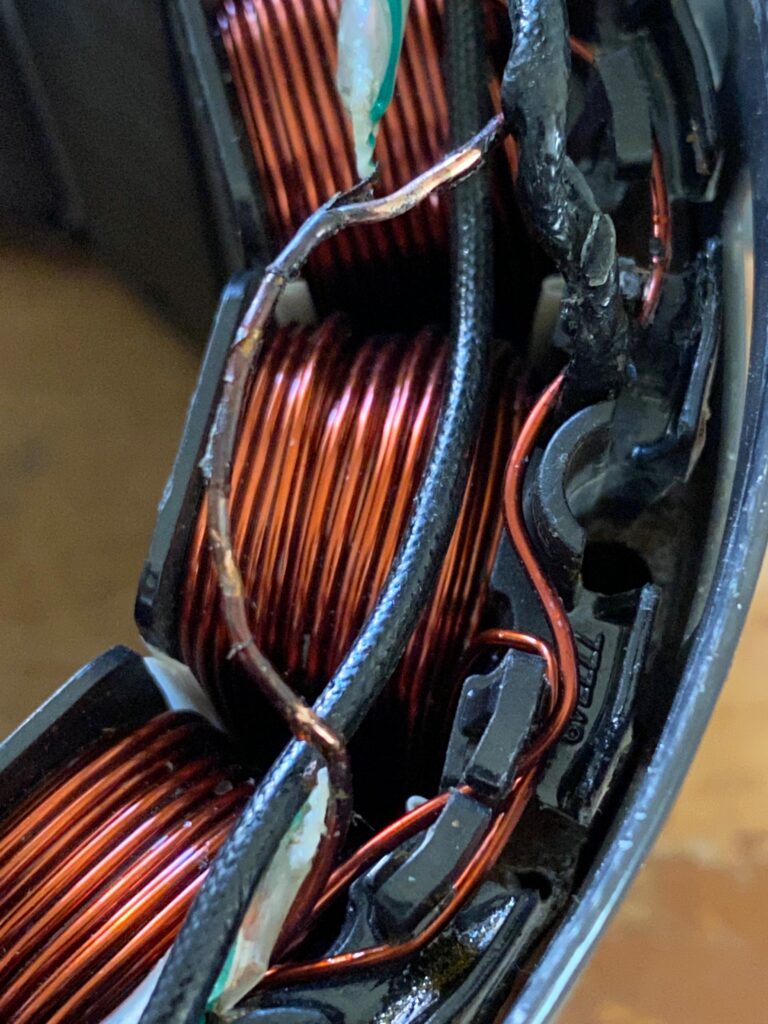 To me it looked clearly exposed. I had the meter plugged in this whole time and I could tell as I freed this bad area the short cleared. To fix, I wrapped it in electrical tape and then put it back down where it was: 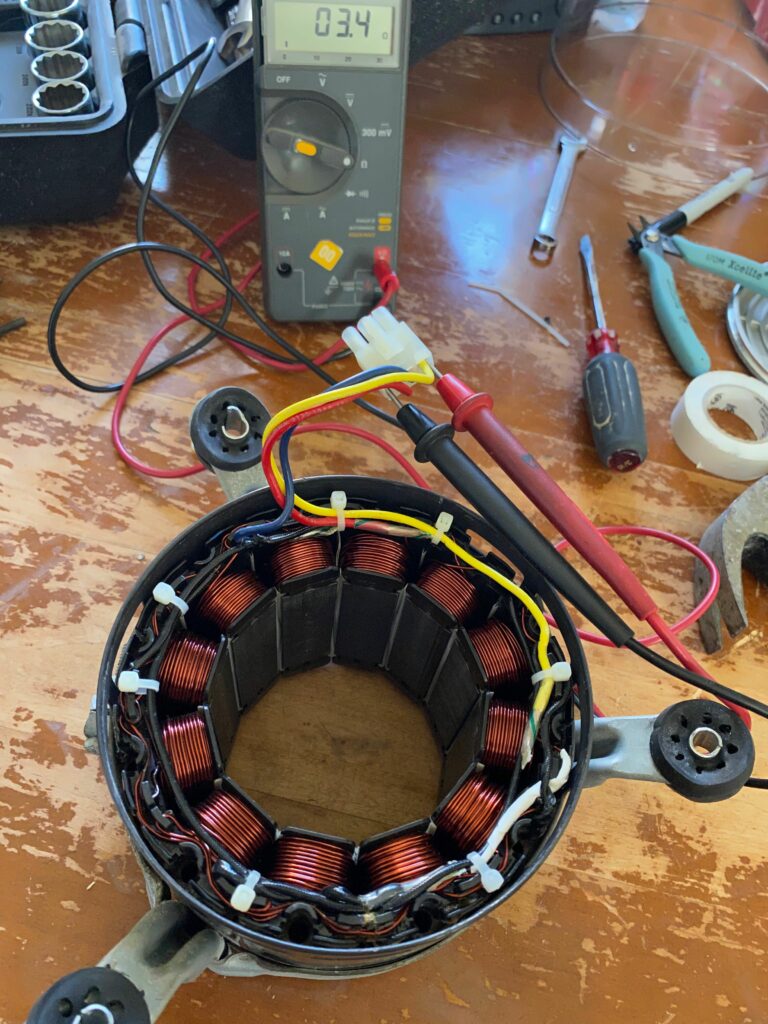 Even pressing it down as much as I could I couldn’t get it to show a short on the meter, so I believed I had it fixed. I put it all back together: 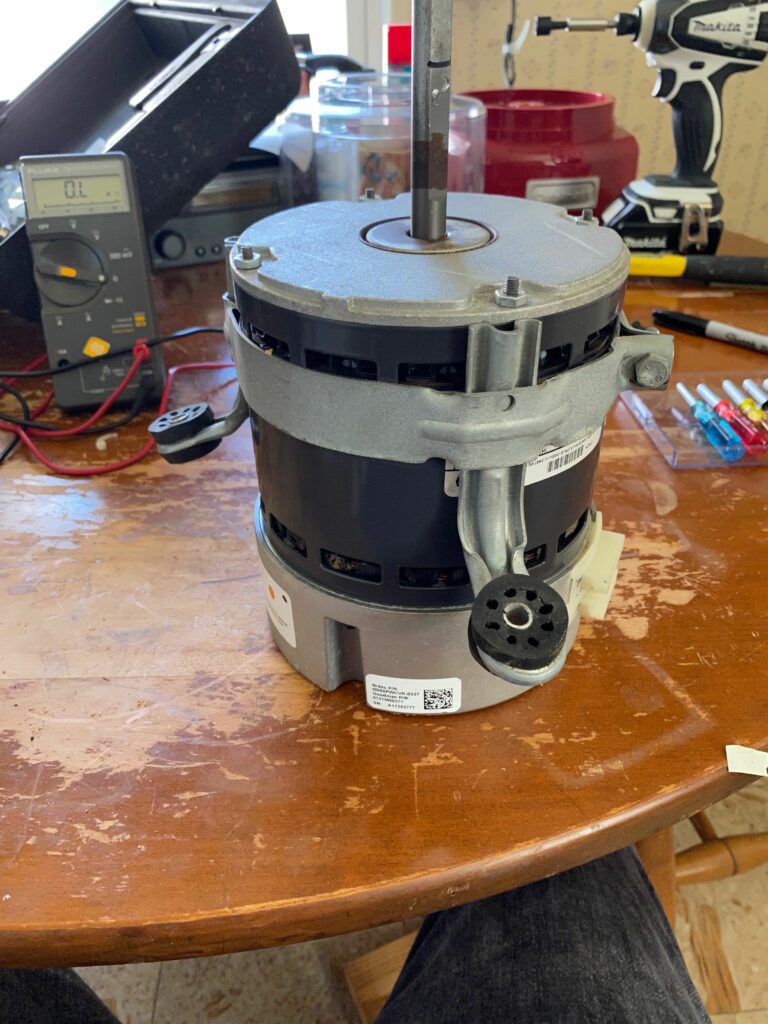 I mounted it up and tested it. It worked! And more importantly, didn’t die after just a couple minutes. Eveything’s been running all day now and my house is finally back down into the sub 80ºF range. I didn’t have central air until a couple years ago, and it’s amazing how fast I’ve transitioned to thinking that 85ºF is unlivably hot.

Now I just have to decide what to do with the replacement I bought off ebay. I just know that if I cancel the order then my motor will die just a couple days later. But if I don’t cancel, then my fix will work for the next 50 years…